skip to main | skip to sidebar

Review: A Brief History of Montmaray by Michelle Cooper 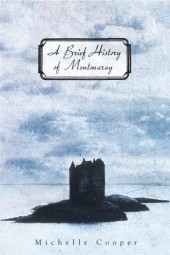 Preface: I don't usually gush like this, but I am a) a bit sleep deprived, and b) totally and completely in love with this book.

I’m trying to be literate about this book, but it’s very difficult. My enthusiasm keeps reducing me to babble. Suffice to say, I loved A Brief History of Montmaray by Michelle Cooper. Rather, I fell in love with the book. Last night, with about thirty pages to go, I inadvertently fell asleep mid-page. When my early alarm went off, I sprung awake and instantly grabbed for the book to finish. I was late leaving for work, but it was absolutely worth it.

It’s the kind of book that seems so effortless, it could have only come from an immense writing talent. Sophie’s voice is rendered in such exquisite simplicity – she is both incredibly naïve and extremely observant, and the reader is rewarded for following her train of thought by moments of pure epiphany, when the truth of things is suddenly apparent to her young mind.

The evolving adolescent mind is the center of this novel. Sophie starts off the novel a romantic, reading Bronte and Austen and Shakespeare, quick to take to flights of fancy, dramatic and, at times, contradictory. She confesses her crush on the housekeeper’s son, Simon, while also reminding herself that he is not of royal class, and therefore, she should not feel so intimidated being around him. The dynamic between Sophie and her intellectual cousin, Veronica, is the perfect propulsive binary – Sophie’s open minded naïveté mixes well with Veronica’s weary academic perspective as the story has important uses for both mindsets. While it is Sophie’s coming-of-age, every character is shaped by the turn of events, and by the end of the book, no character is left formed quite the same that they were at the beginning of Sophie’s chronicles.

The mysteries of the novel unfold with such remarkable timing – minor details return as echoes in major revelations. A muddled family history becomes less confusing, but much, much more complicated. At times, the book read as a true history of a royal family, complete with betrayals, disappearances, love affairs, and even murder. How these factors tie into the present-day context of the book is the true revelation – somehow events that have long been in the shadows reveal their true significance in the face of present dangers, deepening the truth of both the now and the then.

I wanted to follow the book right off the page and into the world of the characters. What will become of their beloved island? Who will ascend to the throne, and does that even matter? What will become of Veronica and her brilliant mind? And Sophie, dear Sophie, whose voice became like a sister’s in my mind. I read so much, it is unusual to really absorb the thoughts of a character, even when that character is the narrator and protagonist. But I liked her so much, and Cooper instills so much intimacy in the way Sophie writes to her journal and, by extension, us, the readers, that what can we do but claim her as our own?

Nancy Siscoe, who sent me A Brief History of Montmaray, called the book “a gift” to us booksellers, and I cannot disagree. I feel incredibly rewarded having been given this book to read, to spend time with, to absorb, to wake up with by my side, and of course, to lend (with caution, of course, as I naturally do not want to lose my copy) to other book lovers who I know will have all the same feelings for this book that I felt.
Posted by the heart is a lonely reader at 11:11 AM

I might have to get a copy of this one and casually leave it lying about for the girl child to stumble across. This method sometimes works. And sometimes it doesn't but then I don't have the share the book, either. ;-)

the heart is a lonely reader
Pittsburgh & Beyond, PA & Not PA, United States
I am an avid reader and a work in progress.

from my virtual bookshelves...